The beginning of a 50-year history in Canada

The beginning of a 50-year history in Canada

2019 is the 50th corporate anniversary of Honda in Canada. They note in their web time line that, "In 1969 when Honda came to Canada, we came as a small company with a dream. We began with motorcycles and power equipment and it took a lot of work to gain the confidence and trust of Canadians. But we worked hard and over time our products earned the respect of the marketplace." It is a tidy benchmark that fits neatly into the present day anniversary but in reality Honda began selling products earlier in Canada and they laid the groundwork for success in the late fifties. Like the Apollo moon landing on July 20, 1969, Honda's Canadian landing just didn't occur out of thin air. Apollo's success rested on the shoulders of the Mercury and Gemini space flight programs and Honda's early Canadian success was largely built on motorcycle sales and the S600 sports car. The initial star in Honda's car legacy! 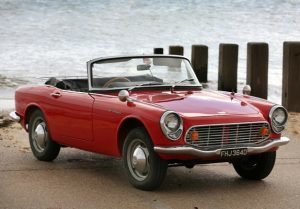 The first Honda motorcycle sold in Canada was from Fred/Trev Deeley Motorcycles in Vancouver in 1957 and Deeley was also the first to import Hondas to the West. Trev Deeley was the exclusive Canadian distributor well before Honda established corporate headquarters in Canada. In Don Mills Ontario, F.W. Manley and Sons started their business importing Toro and Cushman lawn-care machines, but at some point became the distributors for Honda motorcycles. By 1963 the timing was just right. Honda had decided to counter the outlaw image of motor biking with the CA 100 Super Cub and with a catchy ad campaign around the slogan, "You meet the nicest people on a Honda". It was priced at $299.00, included turn signals and twin rear view mirrors. Young men and women were encouraged to enhance their lifestyle on a Honda.

When business picked up during the mid-sixties Manley & Sons hired Tom Faulds, a motorcycle racer and enthusiast, as their service manager. He was soon handed the task of creating a mechanics-training program, a new concept within the well-established Manley organization. A year later Honda launched the tiny S600 sports car and Tom was pressed into the car business and tasked with organizing mechanics training schools. After leaving Manley Motorcycles Faulds was invited in 1968 to join a new operation called Canadian Honda Motor Ltd., which was the factory's first office in Canada. He used the technical training received in his native Scotland to help build customer satisfaction and develop the expertise of Honda dealers across Canada. In 1969 he became the first Canadian on the payroll, and went on to fill vital roles across the organization until his retirement in 1993 from what now is known as Honda Canada Inc.

The first Honda S600 sports car came to Canada in May 1965 when six vehicles were delivered to Toronto. They went on sale in July and another 100 convertibles were delivered in August and by November Manley had the hard top version for sale. It is interesting that Elon Musk seems to have copied the sixties Honda brand development strategy when he introduced his first Tesla electric vehicle to the American market. One thing is for certain customers of the Tesla sports car roadster were asked to pay comparatively much more to drive their brand for the first time.

The diminutive, beautifully designed S600 had a four cylinder DOHC, four carb 57 hp engine that was 600cc and you could rev the engine to high rpms. Running through the standard gearing you would be treated to sporty sound at a modest top speed. Honda advertised that the car offered a two speed windshield wiper, with washer fluid, easy to read dash board, with tachometer, steering wheel lock, comfortable driving position, roll up side windows, lockable fuel cap, spacious trunk and a one push convertible top.

Honda's new entry into the Canadian market was eye-catching and it would have stacked up pretty well visually with many of the sports cars of the day i.e. - the Sunbeam Tiger and Austin Mini and the MG models. It was a little taste of Honda excitement and fun before the corporate decision was made to settle down with the more practical Honda Civic offering in 1973.