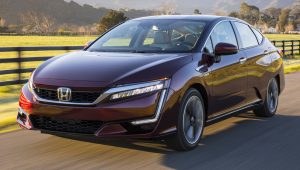 Hydrogen is the lightest and most abundant element in the universe and some car manufacturers, including Honda, are betting that Hydrogen is the future of energy. You would be hard pressed to see the results of twenty years of Honda Hydrogen Fuel Cell (HFC) R&D in Canada, but we could be heading towards an inflection point. Despite the market gains of the Battery Electric Vehicle (BEV) in the last ten years there is greater enthusiasm for the HFC due to its role in eliminating tail pipe emissions, the declining unit cost of the technology and the steady roll out of the fuel infrastructure.

Honda’s Clarity HFC sedan, available to lease in California, generates electricity using a process that combines hydrogen and oxygen inside the fuel cell and emits only water vapor. Hydrogen ions flow through a catalyst, splitting off electrons. Electrons then flow along a wire from positive to negative generating usable electricity while the balance of hydrogen ions pass through a membrane and regroup on the other side combining with oxygen to form water.

BEV tech versus HFC tech is a somewhat lopsided match at the moment with ardent supporters of BEV banking on total domination of the marketplace by 2030. There is; however, still room for competition between the technologies. Here are some of the pros and cons of each approach to vehicle electrification.

HFC cars by and large have a better driving range per Hydrogen fill up compared to a fully charged BEV and the re-fueling time is much less for the Hydrogen vehicle. It takes five minutes to fill the compressed gas into the tank at a station. The so called ‘Supercharger’ electric stations can take between 30-45 minutes to obtain an 80% charge. Not all BEVs can use these proprietary charging units. In many cases a full charge, using a home charging unit remains an overnight task. The range of a vehicle does depend on the manufacture’s technology, outside temperature, acceleration and road conditions. The range issue is debatable on many fronts and it may be that the refueling time to attain a similar driving range will be one of the winning factors in choosing one technology over the other.

I think when some people first heard about Hydrogen being used to power cars they immediately thought about the dangers of the flammable gas stored in the vehicle. Will I be driving the Hindenburg Zeppelin or could this be a hydrogen bomb? Rest assured that Honda has created a safe vehicle. The Hydrogen fuel tanks are mounted securely in the sub frame, they are constructed of high grade aluminum wound in carbon fibre, incredibly strong and impact resistant. In the event of a leak, hydrogen dissipates very quickly and is unlikely to ignite unlike gasoline fumes that pool and stay close to the ground. Lithium-ion battery packs, on the other hand, contain the equivalent energy of several sticks of dynamite. We have all seen videos of lithium-ion batteries catching fire in cell phones, laptops and electric cars. These fires are intense and very difficulty to put out. Some first responders fear using the jaws of life on electric vehicles due to the electrical hazard of cutting through a 300 volt cable.

When can we expect Honda to introduce their Hydrogen Fuel Cell technology to Canada? It may be introduced to British Columbia first, well before the Ontario Government decides to green light the construction of a Hydrogen fuelling infrastructure. Right now HTEC (BC energy company) and Shell have teamed up to build a few Hydrogen pumps in the Vancouver area. I can see Honda deciding to launch a Clarity model in Ontario on or after 2025 once the fill stations are rolled out from west to east. It all depends on building a hydrogen infrastructure that is suited not only to cars but also to the long haul trucking industry. HFC tech is now being integrated into the Chinese and European Union trucking markets (See loopenergy.com). As trucking creates a greater need for hydrogen fuel in Canada HFC passenger cars might well follow into the marketplace.

Until the next time...