Dollars to Donuts it’s a Honda Accord

Dollars to Donuts it’s a Honda Accord 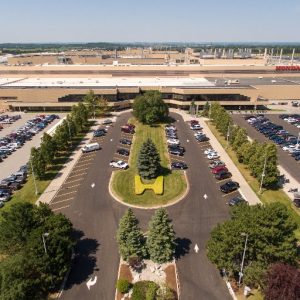 On November 3, 1986 Honda of Canada Mfg. (HCM) became the first Japanese auto manufacturer to establish a production facility in Canada. The launch of the Alliston plant to produce Accords was part of Honda’s global commitment to build vehicles close to where they were sold. The plant capacity was 50,000 vehicles when they started and now Plants 1 and Plant 2 produce in excess of 390,000 vehicles annually.  The sleepy Alliston settlement on Highway 89 was an ideal location that provided Honda close access to Hwy 400 and a railway line.  Before Honda came to town Alliston and the surrounding area had a population of 7,000, most residents shopped downtown on Victoria St. (Hwy 89) and road congestion was something that happened in Toronto. Citizens enjoyed two nifty donut shops that probably were close to Baxter Labs, the largest employer (700) in the area. Now the amalgamated community of New Tecumseth, which includes Alliston, has a population of over 14,000. Big-box malls lure most shoppers and the area boasts twenty donut and coffee shops.  The biggest employer, Honda of Canada, has a workforce of 4,300 that runs on a steady diet of sticky dough and caffeine, unless they get stuck in traffic on Victoria street during a plant shift change.  Honda powers New Tecumseth!

The 1986 generation Accord, with the pop up headlights, that rolled off the Plant 1 line continued the successful legacy of the 1976 Accord, which made such a large impact on the N.A. car market. The first Civics and Accords took full advantage of tail end of the OPEC oil embargo and the consumer awareness of fuel efficiency. Honda debuted the Accord as an economical, fuel-efficient, roomy and Honda-reliable. This model year had a 1.6 litre, 4-cylinder engine that produced a whopping 68 hp, while still achieving 30 mpg.  Hard to believe that this 2000 lb hatchback, smaller than today’s Fit, evolved into a full sized sedan, but back then it was designed to make American midsized cars look stodgy and old fashion. The domestic big three failed to see the competition hit the shores with a better product.

The 1976 Accord set the standard for all its future successors to come, by creating a platform that provide a high level of build quality that was comfortable and reliable yet had a measure of responsiveness from the engine and the steering that exceeded the performance of the sloppy N.A. made mid-sized cars.  It wasn’t a rash, exciting, undependable foreign import. The first Accord exuded a modest expression of competence of design, technological innovation and the Accord began to convince consumers quickly that it was a valid mid-sized luxury car choice. Creating a car that was pleasant and efficient drew many customers away from the old guard and solidified the Accord as one of the top mid to full sized cars of the past 25 years. After watching the Honda Accord enlarge its market share for four years the big three were forced to react to Honda’s stylish front wheel drive revolution. Some auto pundits have pointed out that the big three were never able to draw even or surpass the success of the Accord.

I think we might take a road trip to Alliston this summer to see where my CRV was built and sit for a while to enjoy a coffee and apple fritter.