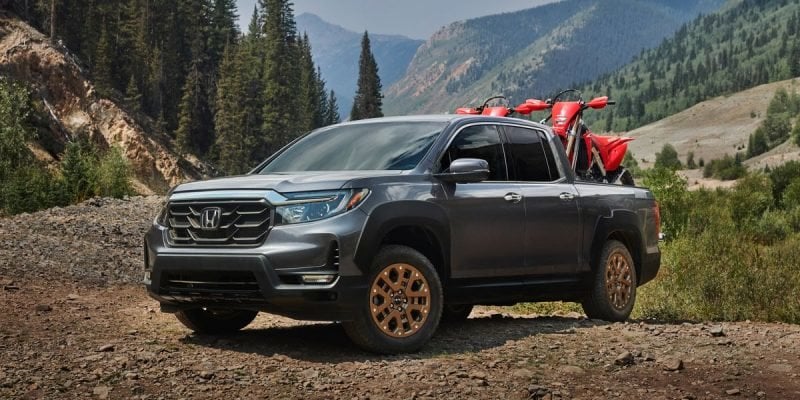 I noted, in 2017 that the mid-sized Ridgeline had blended technology, practicality and fun into a winning truck package. The new Ridgeline displays some improvements which makes this model year a more attractive vehicle for customers!

The advertising mythology created for the heavy-payload, big towing capacity large truck suggests that everyone needs an over-abundance of capability to fulfil their needs. This romantic notion has encouraged customers to seek many large truck features in the mid-size truck market. Do most mid-size truck buyers need to have an unsophisticated ladder-frame chassis to haul a cabin cruiser boat, probably not, but they do need to look like they can. Big truck styling cues are very important in this segment and until recently the Honda Ridgeline was criticized for having a front end that had too much in common with the Honda Pilot. The 2021 Ridgeline has stepped up with a new clean muscular front end profile with a more upright grille, LED Headlamps and pronounced hood sculpting. The all new fascia is designed to improve the aerodynamics of the vehicle. Air routed to the front wheels though large vents located on either side of the bumper create an efficient air curtain for the sides of the vehicle. A new aero skid plate underneath the front end also helps move air and improves handling at highway speeds. 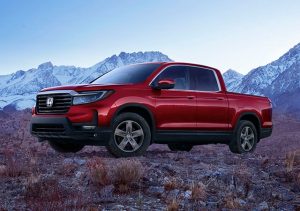 Versatility, reliability and innovation are the hallmarks of the 2021Honda Ridgeline.

The Ridgeline is able to deftly handle many driving situations because of its unibody build and its multi-mode terrain response feature. The composed and comfortable driving experience is created in part by having an independent rear suspension. There is no bouncing shutter that one can find in other trucks with a solid rear axle. This truck soaks up the highway potholes and the off road ruts. It’s a classy SUV drive similar to the Pilot or Passport that can be modified easily to engage more difficult surroundings.

The ‘Intelligent Traction Dynamic System’ changes the Ridgeline suspension and drivetrain for tricky on and off road conditions. Once the vehicle icon button on the centre console is depressed the driver is able to set up the AWD vehicle for normal, snow, mud and sand terrains. Powering the Ridgeline through all conditions is the tried and true 3.5 L V6 engine with 280 HP and 262 lb-ft of torque. It is coupled to a nine speed transmission. The AWD model has torque vectoring that works within the traction system to send the right blend of power to the wheels.

It’s worth mentioning that the innovative durable truck bed found in the 2017 Ridgeline is still the key feature in the 2021 model. Wide enough to slide in four foot sections of drywall that will lie flat in the bed. Strong enough to withstand abrasions from rocks and metal due to its SMC, glass fibre composite material construction. Flexible enough to project sound from six audio exciters mounted behind the side walls of the bed. Add in the lockable, drainable storage chest and the dual action tail gate and you have the ultimate pickup bed, first in its class.

Can you imagine yourself in a 2021 Honda Ridgeline? It can handle the school run or the weekday commute with civilized ease and then on the weekend transform itself with recreational gear in tow for a planned adventure!  Check out the new 2021 Honda Ridgeline coming soon to Midland Honda.

Until the next time,