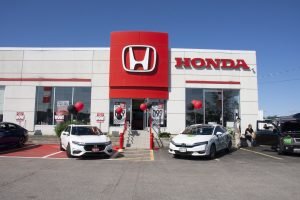 The call went out to owners of modified Honda vehicles to attend the first annual Midland Honda Fest on July 14th. For those who attended it was a perfect summer Sunday to break out the lawn chairs, talk about their vehicles and enjoy the super BBQ offered by Richard Davies and the motivated sales staff of Midland Honda.

The faithful and happy Honda Element owners who congregated their boxy utility vehicles together at one end of the Midland Honda parking lot first struck me as devoted owners who knew they had a good thing going. Luke and Tara were pleased to show me the mods on their 2004 daily driver, which had 444K on the odometer. This was a common theme. Vince had 288k on his 2005 Element. The Element club that gathered at Midland Honda showcased front aero add-ons, lowered suspensions, chubby tires and great rims. The Element had fun built in and these owners excelled in sustaining the Honda mission. 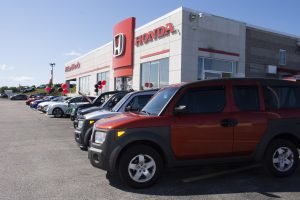 One family arrived with Mom and daughter driving an Element while her son Exequiel Caringal and wife Emma arrived in a pearl white 2000 S-2000 convertible sports roadster. You don’t see many S-2000 around.  Father and Son purchased the Arizona car in Ottawa and together are having a blast restoring this sports car.  It was a total Honda family outing in Midland.

The Civic R group of owners link up regularly for club activities. Midland was a great summer driving destination for the afternoon. Mario owner of a 2018 Civic R was fully engaged in setting his car up for onlookers. He placed two vehicle mascots in the driver and passenger seats and I must say they looked terrific.  The outstanding sheen on his paint job was achieved with a 3M ceramic wrap. Mario improved the look of his front air dam and front hood with carbon fiber. His sound system was very beefy. The Alpine X system had one massive mid-range speaker in the back and later that afternoon he was pumping out the tunes! This Civic R had the racing chops too. Stronger engine mounts for stability and a host of engine bay enhancements allows Mario to turn 140 km per hour corners at Cayuga and Shannonville.

Three friends, Thusee, Jay and Hindu were up from the GTA with two hot Civic Si cars and Hindu had a special 1998 Prelude Type SH that he was working on. I especially liked Jay’s detailed treatment of his Si dash. Red Carbon vinyl wrap accentuated the interior’s speed racer feel. His treatment of the car’s rims was also noteworthy. Nice gold Avid 1 rims.  Thusee had Red Gold rims as well on his Si. Matte gold looks pretty good on the Honda Si!

There were three Honda owners that were somewhat untraditional with the modifications to their Honda rides. Cale and Ashley presented their colorfully painted 94 Civic turbo hatchback with matching chopped Civic trailer.  The package had an innovative design and it was one of my show favorites. Adam brought his award winning 1988 Honda CRX with Lambo scissor style doors. It was tricked out with a super sound system and a large TV monitor in the back. A former race-car that had been modified to entertain the crowds.  Shawn on the other hand offered Honda Fest the show’s sleeper. An unassuming black 1999 Acura Integra turbo with only 500 HP. Special forged gear under the hood allows him to get going in a hurry on the 400!

The Honda cuteness award could have gone to Cale’s psychedelic Civic hatch and trailer but I think the Honda mini delivery truck, owned by Krystal’s grandfather, was the standout here. This little workhorse was unique and it was a great addition to the Midland Honda Fest.

The burgers and sausages that Richard and staff offered to the entrants and spectators were outstanding. I believe he made a special trip to Hamilton for this great food. It was a very enjoyable and casual day meeting and speaking with Honda owners who loved sharing their passion for Honda vehicles with me.  The Midland Honda crew is planning to make next year’s Honda Fest even more enjoyable. Keep July 14, 2020 open for the second annual Midland Honda Fest. Should be very interesting!