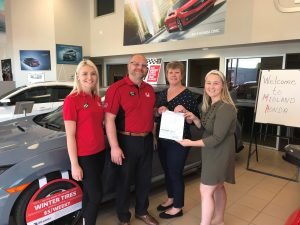 Midland had great summer weather on June 8th for this year’s Butter Tart festival. A bright blue sky greeted Richard Davies, V.P. of Midland Honda, and me as we headed to the dealership to rendezvous with fellow Midland Honda volunteers. The early morning plan had the team drive a new Passport, a Ridgeline, a CRV, the electric Honda Clarity and a new Red Civic down to the Lake Front Park to set up the Midland Honda vehicle display and the tart sales tent. Our goal was to generate as much money through the sale of tarts for the Big Brothers and Big Sisters of Simcoe County. We squeezed a few vehicles around the Midland Honda car trailer and then waited for festivities to officially begin with the March of the Butter Tart. Rene led the local pipe band past our area while holding the ceremonial tart proudly on high. A fine traditional to behold!

The key to a successful tart sale is the free sample, which confirms that you are indeed offering the hungry crowd one of the best tarts available. Couple the cutting board tart slices with the carnival barker banter of Richard, Tom, Krystal, Laura, Joshua, Dawn, Matt, Claudette, Michelle and Colin and you just can’t resist sampling Grandmother’s Bakery Shoppe’s plain, raisin or walnut butter tarts. Many people slowly drifting by were snagged by Richard’s tantalizing list of mouth- watering ingredients. How could you resist real butter and maple syrup without any hint of margarine or preservatives? I saw no one frown after the first bite. Later in the day, either Krystal or Matt added the most consequential invitation line to the day’s tart sale. “Come on in folks and test drive a butter tart!” Test drive 6 for 12 dollars and all the proceeds go to the kids who are getting help, guidance and comfort from the Big Brothers and Big Sisters of Simcoe County. 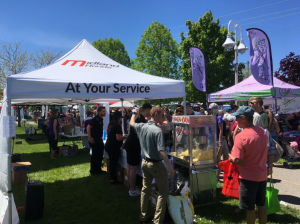 How successful were we? The sales team was mighty good! 414 six pack butter tart trays or 2,484 individual tarts were sold and probably 20 trays at least were carved up as samplers. The profit from the sales and a round up donation from Midland Honda totaled $1500.00. Midland Honda is pleased to provide this amount to Big Brothers and Sisters of Simcoe Country!

Everyone from Midland Honda was happy and exhausted after participating in another successful butter tart festival.